Try these Turkey Day favorites made healthier so you can stay on program!!

Don’t be a turkey this Thanksgiving…Make our version of stuffing this holiday season and avoid the extra pounds from the high calorie traditional versions.
Stuffing is usually baked within the food in which it’s stuffed, such as a turkey or chicken. This version bakes the stuffing separately, saving calories and fat. If you prefer extra-moist stuffing, add more low sodium or no salt added chicken broth or water.

Directions
Preheat the oven to 350 F. Lightly coat a 2-quart baking dish with cooking spray.
In a large skillet, heat the chicken broth over medium heat. Add the celery and onion and saute until the vegetables are tender, about 5 minutes. Remove from heat.
In a large bowl, combine the bread cubes, parsley, tarragon, paprika, nutmeg, cranberries, water chestnuts and chopped apples. Add the onion and celery mixture. Stir to mix evenly.
Spoon stuffing into the prepared baking dish. Cover with aluminum foil and bake for 20 minutes. Uncover and bake 10 more minutes. Serve immediately. 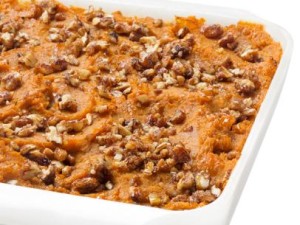 Bring a few inches of water to a boil in a pot with a large steamer basket in place. Put the sweet potatoes in the basket, cover and steam until tender, 20 to 25 minutes. Transfer the potatoes to a bowl and let cool slightly. Add the honey, egg, 1/2 teaspoon cinnamon, the nutmeg, ginger and 1/2 teaspoon salt; whip with an electric mixer until smooth. Spread the sweet potato mixture in the prepared baking dish.

Mix the brown sugar, pecans and the remaining 1/2 teaspoon cinnamon in a bowl; sprinkle over the potatoes. Bake until hot and beginning to brown around the edges, 40 to 45 minutes.

And Best of All for a SWEET TREAT for the holidays that won’t blow your great results in the gym…a HEALTHY version of apple crisp!  Mmm Mmmm…YUMMY 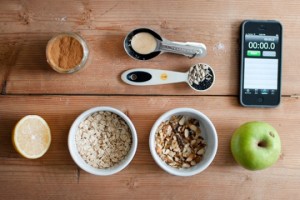 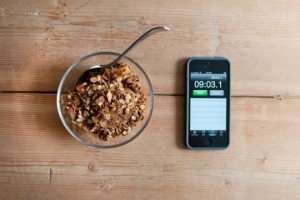 Come by and see what we’re all about.